Being the wife of a head high school football coach can be quite the task. There’s booster clubs meetings, games to attend, people to meet, errands to run, a husband and team to support and prayers to be prayed. And all that is just when you’re winning.

When the season isn’t going as expected, there’s a completely different list…make an attempt to say all the right things to your husband who just lost a game and has the weight of his whole team on his shoulders, do your best to not punch rude fans in the throat when they make horrible remarks about your husband and the team, keep a positive attitude when everyone around you is negative, believe in your husband, his dream and abilities even when he has a brief moment of disbelief, and pray for sunshine in the midst of thunderstorms.

Would I like for us to be undefeated this far? Heck Yeah!!!!

Would I love for the freshmen to instantly gain experience and confidence in their new positions? Yes!!!

Would I love for 25 experienced, huge ball players to join the team right now? Without hesitation, yes!!!

But even right now I’m thankful. I’m thankful because I see all the victories that have taken place.

I see the young men who haven’t had their fathers in their lives have a man tell them that he loves them and mean it.

I see a successful program being built. 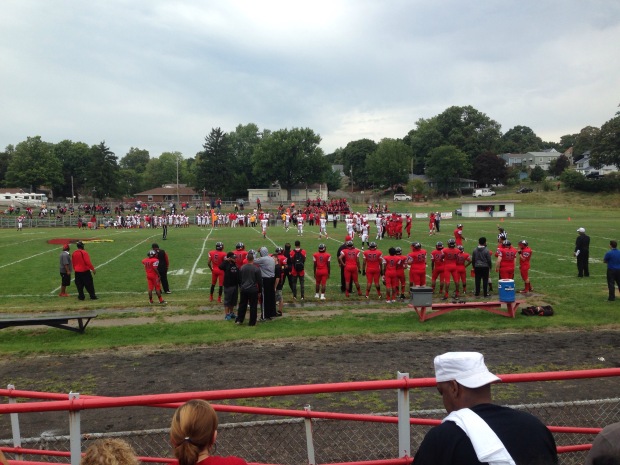 I see an example being set of what a godly, dedicated husband looks like.

I see so much more than the losses. I see the sleepless nights, the quiet days when he’s thinking about what to do next. I see him telling players how proud he is of them when their hearts hurt from losing.

I’ve seen him take phone calls all times of night when a players family member died, I’ve comforted him while he was comforting them.

I’ve gotten the phone calls to go get groceries for a player and his family because they didn’t have food in the house and to pay someone’s water bill because they’ve been without for a week.

I’ve seen my husband pay for homecoming tuxedos and put money in a players hand so he could take his date out to eat.

I’ve seen him go pray with families who have unexpectantly lost a loved one. I’ve seen him visit a player who went to jail and cry tears because he seen how his environment changed him.

I’ve seen him give half of his stipend away because he wanted all his coaches to be paid. I’ve seen him work two jobs and coach just to provide for his family.

I’ve seen and learned a lot of the past ten years being married to a coach but what I value the most is my husband’s heart for his young men and the hope that he has in them and their futures. I’m so proud that even in the face of adversity, I still see his heart is for God’s heart and for that I’m thankful❤️❤️❤️

BY GRACE THROUGH FAITH

For She Is Called
Joy To The Soul

Joy A. Williams | sharing "hope for the heart and joy to the soul"

A walk in my shoes

From Relationships to Weightloss

raisingthelionking.wordpress.com/
this is... The Neighborhood

the Story within the Story

A topnotch WordPress.com site on Personal Development: the diary of "April" from Paris, London, on work, play, and love

The Business of Motherhood

A World Within In A Forest

Hosanna in the highest